Since I have returned to full-time work and my baby has started going to full-time Japanese nursery school (Hoikuen), I have started to worry that he may lose his English language ability. I know, he is only 1.5 years old, but it is something I now think about a lot! I really hope that he will be bilingual as he grows up and speak English to his mummy and Japanese to Daddy.

Here is my situation:

I have done some research, including reading the fabulous blog called “Bilingual Monkeys” by Adam Beck (Adam lives in Hiroshima), and asking our friends who are in a similar situation about their experience.

Last week our friend JC sent me a wonderful reply about his experience and he kindly agreed for me to share it with you all. Here is JC’s experience and advice below! Thank you JC!

It is probably best for one parent not to code switch. I have read this can be confusing for a child, and also seen it in my experience – most especially with boys. The parent who speaks the dominant language of the country can code switch some with the child, because the child will still be getting a lot of input in the country’s language. The parent who natively speaks the non-dominant language should not code switch. The child may very well find it confusing. Having said that, if you, Kate, moved back home and thought your son needed more Japanese, and switched to this, he would find it very confusing and it could cause problems down the line. Stick to what you started with – he can always get Japanese from his Dad in that case.

2. Spend time with your child

Some people have tried speaking one language on certain days of the week, or in certain rooms. But this takes a lot of discipline, and again the child may find it confusing.
If one parent (most especially the one who speaks the non-dominant language) is busy a lot and not around home etc., it can be very hard for the child to pick up real fluency in the language. You really need to find time to spend with the child in this case on a regular basis. I have seen many kids grow up in a supposedly bilingual environment who are functionally monolingual, or with only passive English (near 100 percent listening comprehension, little confidence or interest in speaking). I was lucky (or dedicated enough?) to have a lot of time with my son, and in his younger years in Tokyo I would say his English was actually better than his Japanese.

3. Consider how many children you will have

Another big point is that this whole issue is a lot easier if you have an only child. When another child is born, the children will inevitably at some point start speaking the dominant language of the country to each other. This can start to infect the house, and kids may very well even start speaking to their non-dominant language parent in the dominant language even if they fully understand what the parent is saying. The only exception I have seen is one Australian/Japanese family I know in Japan where both parents spoke English exclusively within the family. This may work well unless you move back to the other parent’s country and lose one language completely. Of course you don’t want to let this affect the choice of how many kids you have, but it is something to consider.

Of course, read to your child a lot.

Talk a lot, even if it sounds like you are talking to yourself.

When you carry the child in another room, say “Let’s go in the other room” “Let’s have lunch shall we?” Even if the kid doesn’t seem to be responding or getting it, they are. It is all building up like a glass of water and will eventually spill over into communication.
Play games. My son and I would play simple card games. I taught him Go Fish/Fish. He could already count to 10, so when he asked me “Do you have a 9?” he would first count the number of hearts or spades etc. on the card so he would know what the number was and he eventually learned to associate the number on the card itself with the spoken number. — I remember his mother got a bit jealous of this and played this game with him in Japanese to try to get him to learn Japanese numbers and eventually he got livid with his mother and yelled (in Japanese) “Let’s just do the numbers in English!!”

I also played the story game (which I eventually adapted into an English teaching tool for my English lessons as well). Start any kind of story, preferably with things kids like, like characters or animals. Say, “A dog was walking down the street and he sees a gigantic cat” and then let your child continue the story a bit before you take over and say a bit, and the let them take over, etc. At first I was doing most or close to all of the talking, but as time went on I barely had to say more than a few sentences and my son would take the story on these amazing odysseys underwater and in outer space…

I started one mostly for Dads in Tokyo on the weekend (there were plenty of mother groups for stay home mothers). Plan trips to the park etc. with other parents who speak English fluently or very strongly. You have to set the tone – kids are shy at first and looking for direction – the parents can start and direct play in English and the very adaptable kids just follow the parents’ lead and play in English. If you just let them have at it with no direction, (and especially if there are enough kids who speak Japanese as well) it will quickly become a Japanese play group if you don’t keep an eye on things. After a few meetings of playgroups like this, kids tended to play in English with no more direction from us. If you do this, you have to be vigilant about who you allow to be in the group because you often get hopeful parents who have kids that they wish spoke English or should be able to speak English, but don’t really speak much. They think their kids will pick up English by osmosis but all that happens is all the kids switch back to Japanese to include this child, and you are back where you started.

How to start a playgroup:

I started an English playgroup for working parents who could not make weekday playgroups. It started as me and one other father in 2004 or 2005 and only broke up after 3.11 We advertised on tokyowithkids.org etc. but could never get enough people to agree on a date to try the first playgroup. People are notoriously non-committal by nature I guess. We finally just said “We are having the playgroup on this date in Yoyogi Park, come if you can.” We worried it might be just us when we showed up at the park at the prescribed time but actually a heck of a lot of people showed up. After that people came and went, but we eventually had a good core of parents who showed up most of the time once a month. The kids really got to know each other, most spoke Japanese, but we set the tone early and they would play in English without monitoring after the first few playgroups.

The first time my son spoke to me in English

I remember a time when my son was very young (less than 2). At this time, he did not speak English to me, even though I only spoke to him in English. I was beginning to think he really wasn’t understanding everything I said. One morning I was hanging out with him before going to work. I said “my head hurts” Kane said “何で頭いたいの？” I was almost bowled over. I said, you really do understand everything I am saying right? Kane said “うん”. So, I asked him very gently, if he wouldn’t mind trying to speak to me in English if he had no trouble understanding me. He gave a look like he’d think about it. And from then on with more gentle prompting from me he eventually started speaking 100 percent English to me, well, 99.5 anyway (he slips in a few Japanese words in his sentences here and there).

We have had some success. For whatever reason, my son has a few pronunciation issues, his tone is a bit off, but I honestly think this is just him more than the environment he was raised in. However, when people meet him (especially people who have been around a lot of multi-cultural kids) they always assume he goes to an international school and not a Japanese school because of his level of fluency. This is the best gauge I have had.

If you are also thinking about literacy in the non-dominant language, that is a whole ‘nother can ‘o worms!

Thank you so much JC! The story of when your son first spoke to you brought tears to my eyes. I can only hope to have the same experience with my son. Thank you!

And also thank you to Shaney for putting JC and I in contact and for introducing me to the Bilingual Monkeys blog! 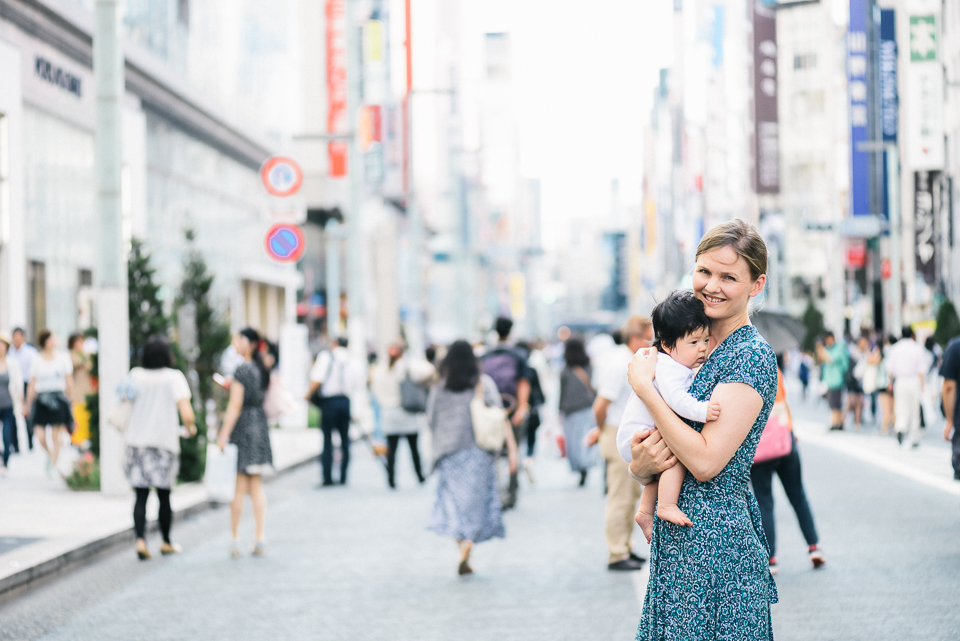 Sign up for my latest news about traveling with a baby in Tokyo and insights into my members section. After signing up, please check your inbox to confirm your subscription!